Family budget 2007 -2008
Family budget. As promised I want to publish a break down of our family budget for August 2007- August 2008 and later on I will compare it  with the one in August 2008 – August 2009.
First of all I want to give a brief explanation of breakdown:
Accommodation – we have got no mortgage so we are renting a two-bedroom apartment.
Bills – all bills related to maintaining apartments – electricity, heating, land line phone, internet, etc..
Kindergarten  - we both work, so with child has to go to a kindergarten. Its  actually enjoys it quite a lot, to socialize with friends and be among kinds same age.
Car insurance – speak to itself.
Miscell  -  gifts to relatives and friends,  haircuts,  cleaners and wax for our car, etc..
Drugs -  primarily mouth healthcare products, occasional prescriptions.
Medical insurance - speak to itself. It is provided be the employer, so we have only pay 200 a months, for a family coverage, dental is not included.
Food – We separated our food from the child, as its primarily consumes organic only. We thought it would be a good start to build a strong foundation.
Child –  everything related to it – food, clothes, toys..
Gasolin – idea was to look how much to we spend on gasoline and how it weight in overall budget. I know that gas price affects other items as well, but we just thought it would be nice to count it separately.
Clothes, things - speak to itself.
Entertainment, Books – occasional days away and vacations, it is also include all other expenditures – cinema, restaurants, parks, etc..
Home -  everything we need to buy to maintain our living in it.
Mobile, phone cards - speak to itself.
Alcohol –  it is good to count, what we are spending on it. Apart from special occasions we tend to limit ourselves to $20 per bottle of wine max. We quite a like in our  leaning towards wine, rather than spirits and beer.
We do not keep any special finance programme, just an Excel spread sheet.  It takes a bit of discipline to fill it after each purchase or at the end of the month, working with statement, but it worth it.

We spent nearly 62 K a year after taxes.  It will be easier to see it as a chart: 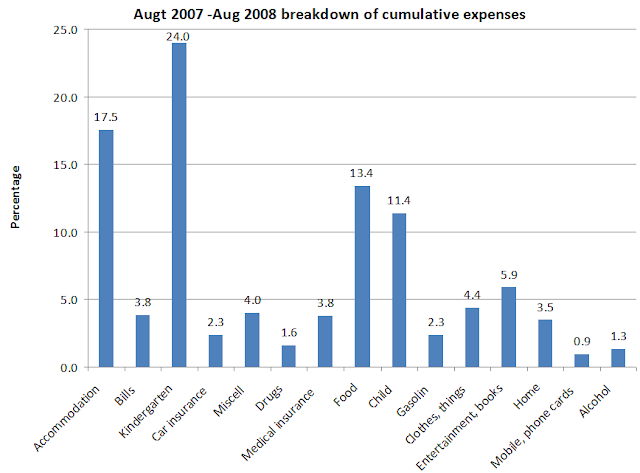 As you can clearly see, that half of the child consumes 35% of the family budget, adding accommodation and the bills – we got roughly 57% to spend on what is considered essentials.
Gasoline is about 2.3 percent, so there is no point in trying to break the balls over  saving some gas by slowly starting and stopping at the lights.  If you save 10% of it (which is very, very high estimation) it is only 145 dollars a year. Is it worth to take away all the fun out of your life?

On average it is 5133 USD after taxes a month.
The things are considered as essentials: Accommodation – 18 %, Bills – 4% , Kindergarten – 25%, Drugs – 2%, Medical insurance – 4%, Child – 11%. Total: 65% of the budget is out of our control.
I have to confess, that it is not completely representative, as we haven’t been on a long vacation in that period and with Virgin islands and Canyons next year (August 2008-August 2009) entertainment budget will be bigger.  But we hope that we will manage to stick to the same annual expenses of $ 62 K.
Keeping the record is very interesting and useful, as when gas reached $4 a gallon we started spending $120-130 a months, instead off $80-90.  So there was no panic. Additional $40 a months out of 5000 dollar budget it is less than 1%. Again, of course it affects other prices as well, but not to a great extend, in our case.  In that period we managed to save about 40% of our after tax income, which is good, but as we have to relocate every a few years in a search of new job, we consider it as a minimum due to the uncertainty with the income and employment.
Posted by Personal Finance at 11:08 AM