Period  2009 -2010 August.
While I am still going to prepare what and how we did in the above mentioned period,  just to track  expenditure and spending habits. I am going to shift the focus from what we are doing towards my goal to financial independence. However, I started accumulating the content and did some basic analysis back in 2008.
Last year I invested all available resources into couple of properties in the apartment blocks that are currently being built.  Despite the fact that we paid 100% upfront in Russia it is a high risk investment, as there is not any guarantees or protection.  The reason for such step is not gaining any advantage, or additional rental income but to have some security against uncertainty.  Typically it takes 5-7 years in Russia from time money are invested, till you have keys.

As an example - the apartment I bought is being erected  with original deadline in 2007. I invested my money in 2010 with verbal promises that it will be finished at the end of 2010 and all utilities connected and paperwork completed in 2011. In contract itself there is no any guarantees whatsoever. This is reality in Russia, the building company is among several behemoths with connections to the very top. Then again the apartments are bought as non-investment, for living.  In other words it was not procrastination of any kind, just diverting of my money elsewhere.
My A to B
Where I am now: 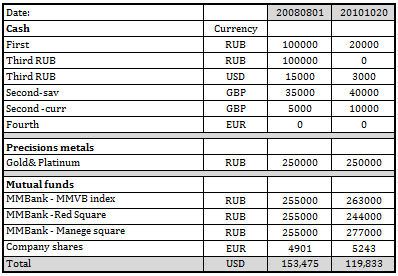 As you can see the actual position worsened from 2008 to 2010 by nearly US $35 K. About US $30 K was due to the dollar is stronger than ever before towards EUR, GBP, RUB.
Where I want to be:  Looking at the crisis outside I would define financial independence as following:  US $60 K USD a year  if the principal is generating  3 % a year., i.e. 2 million dollars in today money.

The question is who to get there?
The only way to reach my target by 2019 is by saving US $100 K a year and count on interests rate of 5% for generating for the rest of my life. For 3% a year I need be able to save US $180 K a year. Obviously both savings rates are not realistic, with my current level of income.

There is no silver bullet - only diligent saving & time.
Effectively if I would not buy  the properties and invested them now, with contribution US $40 k a year and growth of 5% I could reach the goal by 2026.
Perhaps this is something like a cold water shower in the morning and very sobering reading but it is  the only way out, as far as I could see.
Time is on an essence  - should I stop my annual contributions in 2019, I would still reach my goal by 2044, but if will I continue to do so, I would double my target in 2044.
Funny thing is, that should I invest only 100 K US today, by 2045 I would be better off than my parents today (they are retired on a stated pension - 2400 US a year) .
Forecast for today:
Posted by Personal Finance at 12:27 PM