From A to B and  how.
A - Knowing where you are (current net worth)
B - Where you want to be  (amount of money you need to achieve financial independence).
How – Family budgeting vs. Income –Savings and where to invest.

These are the financial independence basics. One would still need to have key performance indicators. For my plan and portfolio I want to choose following:
-         Absolute total return on invested cash. Expressed in dollars and percentage.
In 2012  the result was $5,4 K and 3%.
-         Relative total return (measured against S&P 500)
3% vs. 14% (S&P 500).
-         Inflation adjusted return.
2012 inflation was 3%, hence adjusted return was 0%.
-         Cash accumulated to be invested (annual figure expressed in 2010 money).
$ 51 K vs. $ 40K planned.
-         Assets & currency allocation.
To be developed. Moving in the right direction.
-         Personal expectation.
After getting acquainted with inflation, I lowered my expectation of early retirement /financial independence.  However this is still a very important indicator.
Suppose market performed well, but you did not manage to accumulate as much money as planned – you still on target. Sometimes market was bearish or certain assets underperformed, but accumulated cash compensated for it.  You need to have your own understanding and aspirations.

Financial Independence KPIs should be part of any portfolio. Just to realize how you are doing. Numbers are the name of the game.

Personal expectations are critical.  Sometime ago I have realized that investing in mutual funds is a relatively safe bet due to diversification of the portfolio.  It does not bring a lot of results.

For me investing at $ 40 K a year in 2010 money terms (in 2013 this would mean $ 45K) reaching financial independence would take 29 years (achieved in 2040).
There is two basic assumptions: investments will bring 2% above inflation a year, annual savings would go up by 1% ,  yet again inflation adjusted.

Please see below summary in a table format: 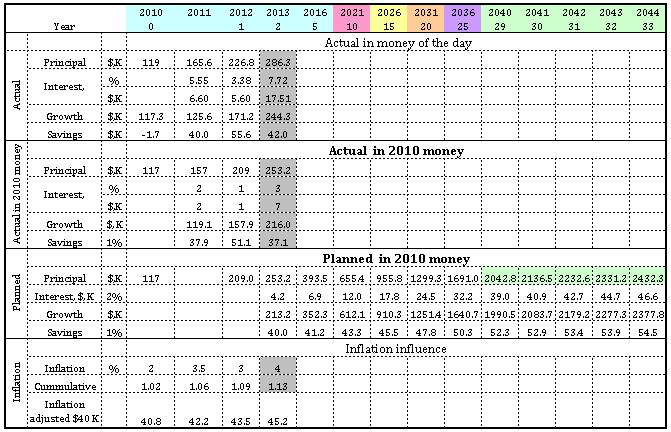 There are three sub tables:
Actual in money of the days – figures “as is” at the end of the year.
Actual money – inflation adjusted to 2010 money.
Planned in 2010 money – this is plan how to get from A to B and achieve  $ 2 million dollars in 2010 money.

The reason sticking with 2010 money not only symbolic or sentimental. I have reliable data from 2010, otherwise it will always a moving target due to external and internal inflation. By internal I mean increasing our family budget without good reason.  One more point is that we recently moved to a more expensive area – while it is providing as better employment opportunities, we are not planning to stay here forever and pay 50% premium once financial independence is reached.

Financial independence is when with your investments you could achieve two things:
-         Provide for your annual expenses.
-         Accumulate enough money to compensate principal for the inflation. In other words if last year inflation was 3% and you have big enough nest egg to live on 3% a year, you need to generate 8% income (additional 2% will go towards taxes on the re-invested money).
This is only sustainable way.  Less risky strategy – have a bigger nest egg, so you would need lower income (percentage wise). For example with accumulated $ 6 million dollars you would only need to generate 3% above inflation.  In comparison with example above 6% instead of 8.

In a way it makes me more relaxed with understanding that additional $ 10 K  a year could hardly make a big difference in medium to short term. Remember we are talking about 25-30 years period.

Years to achieve financial independence ( $ 2 million in 2010. All figures are in 2010 money, annual gain – inflation adjusted):

In a chart format: 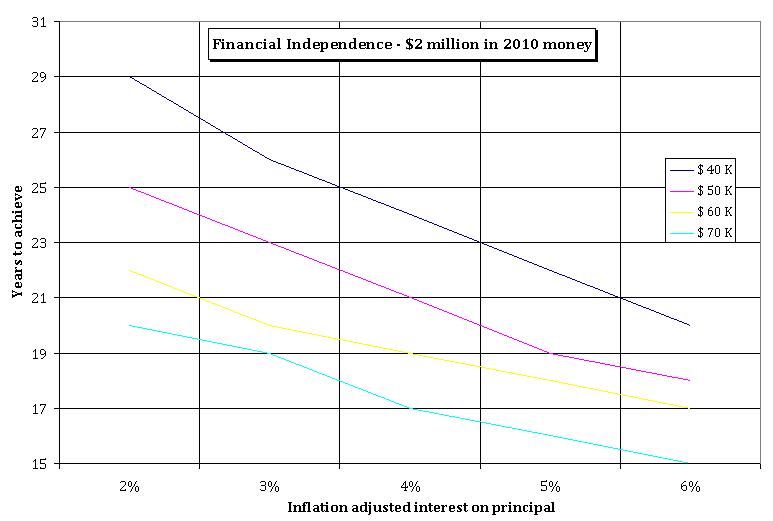 Assuming that you will go for a safe bet. The better the market performs the less difference it make (additional money put in).

Observations:
- Increasing annual contributions from $40K to $70K buys you 9 years in low growth scenario but only 5 in best case one.
- What it could potentially mean that any savings in excess of annually planned $ 42 K I may want to invest in more risky but potentially high return stocks.
-  Saving additional $ 1 K year on small things (coffee, etc..) and investing it  will not buy me an extra year in any scenario.


Posted by Personal Finance at 2:58 AM