With interest rates still low – some government bonds offer negative interest rates – the Eurozone crisis stabilizing and the US economy healthier, investors are emboldened.
A huge amount of liquidity has been sitting in cash or negative yield bonds out of fear. As that recedes, a wall of money is flowing into financial assets. Debt markets are very accommodating and there is a lot of capital sloshing around.
Some of the governments are more desperate than others – in the UK there has been serious discussions on imposing negative interest rates as a stimulus measure.  This will further undermine the savers efforts to earn meaningful money to preserve the capital against inflation.
Spread between yields for highly-rated and lower-rated companies bond is far narrower than it is used to be. Investors are chasing returns, sometimes at all cost. It is not unheard off that emerging markets institutes rated at BBB- successfully selling bonds at 3.6 per cent in USD. This makes bonds rather risky and pricy investment.
Investors are putting money in the assets they would not do otherwise for the premium they are getting – stock market at the current returns. Markets are almost at all-time high, while the returns are very low.   There is a risk of not only erasing value of the money, but erode the returns as well.

Currency Wars.
The countries are on the brink of currencies war, to protect their economic growth and well being. It is also very efficient way to get rid of the debt. 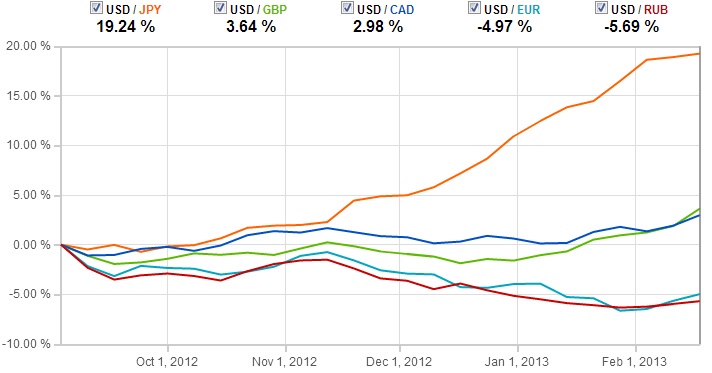 However historically wise situation is not so bad: 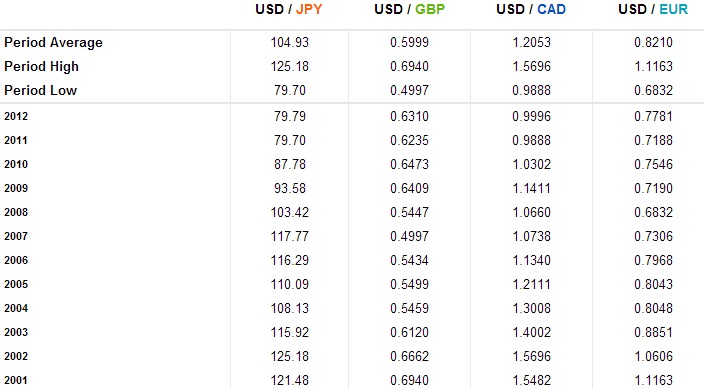 Such data is not entirely representative, as different countries have various inflation rates over the period of time. One would imagine that it would be about the same in globalization market among the developed countries. In the last decade inflation in the UK has been significantly higher than in the USA, while in European Union expenses where much butter controlled.
However if you are earning your money in the same currency you are spending and all your obligations are in that currency as well, the diversification presents merely opportunity, rather than risk.
One need to remember that diversification whether it is currency, or mutual funds spread the risks but potential reward as well.  It is if you would beat on different car manufacturers – there will be always be winners and losers.
Broad market presents opportunity to go across the sectors and seek opportunities there. However this might not to present desired diversification as those are independent companies in the relevant sectors and you still might lose it all. An appropriate analogy would be not spreading bets at the same table but betting on multiple tables at the same time. Investing is not a gamble but a calculated risk, however the important word to understand is risk.

I do enjoy what I am doing at work.  There is ups and downs but in general I am quite content. On administrative side of things there is huge uncertainty with duration of the contract and the future.
On personal side of things I am finding it stressful and not particularly comforting. Fact that at the current savings rate I am unlikely to achieve financial independence before my “normal” retirement age does not help.
On the other hand I have a roof above my head, food on the table and be relatively in a good health.  I received a small bonus for the last year – in a region of $ 10 K and I am planning to invest it in full in stock market.  It should give me about $200 - $400 income a year for life during retirement. Every little helps.
I have been quite fortunate to secure a relatively good contract for next year, this should help to fulfill financial goals.  I find it somewhat challenging to save the money and delay consumption.
Posted by Personal Finance at 1:56 AM