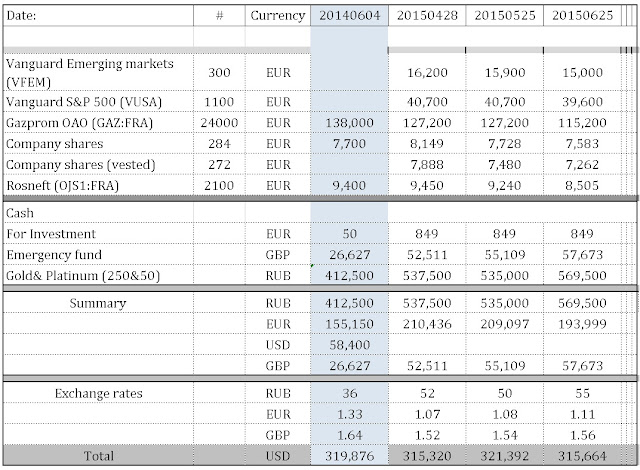 Observations:
-         EU is pressurising hard Gazprom for a cheaper natural gas prices, while restricting access to the EU customers.  As this is done under political umbrella EU has assumed right to arbitrarily penalise the company.  Although Gazprom 2014 vs. 2013 sales were almost the same (to be precise these were 6.5% higher on year to year basis), net profits fell by almost 47%. (to USD 13.85 billion). This is mainly linked to RUB slide towards USD.   Gazprom sale price is linked to the oil with 6 months lag, so sales in 2015 will be at lower prices.  Good news is that EU storage is at about 30% fill, which is significantly lower 5 year average.  The other important factor is that 2014 had a record warm winter, demand in 2015 will be higher by 10-15% (EU demand 494 bcm from 460 in 2014, Gazprom export 160 bcm from 138 bcm in 2014).
This would be rationale to reinvest Gazprom dividends this year.
-         I have accumulated significant amount of cash (30% of the portfolio) which needs to be invested.  Currently I am in S&P500, Emerging markets and Gazprom shares. I am looking for an index fund which tracks Germany Large Cap Equities - DAX. The Index measures the performance of the 30 most traded and by free float market capitalisation largest German stocks listed on the Prime Standard segment of the Frankfurt Stock Exchange. I am thinking about iShares Core DAX® UCITS ETF (DE) is an exchange traded fund (ETF) that aims to track the performance of the DAX® Index as closely as possible. The ETF invests in physical index securities. They are transparent, cost-efficient, liquid vehicles that trade on stock exchanges like normal securities. iShares ETFs offer flexible and easy access to a wide range of markets and asset classes. Total expense ration for the fund is 0.16% .  Of course on top of it I need to pay my bank to keep and manage the funds. The fund domicile in Germany.  This should  balance between the USA, Emerging market, EU and Gazprom.  The dividends for the DAX ETF are paid annually and current return is 2.1%.
Posted by Personal Finance at 6:02 AM