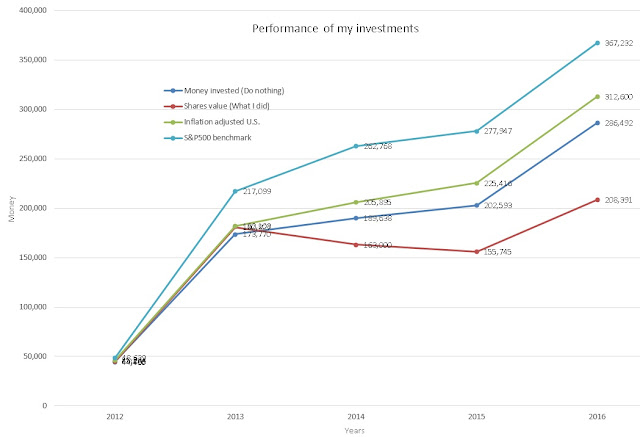 I was thinking long and hard on whether to publish this performance comparison. It would actually be even grimmer, as EUR lost to USD almost 20% over the period of 4 years.  This tendency (EUR depreciating to USD) is likely to accelerate.  Western Europe allowed itself luxury of sanctions, conflicts and indulging into expensive politicking.
Admittedly, many funds underperformed, this should not be treated as an excuse:
Mainly for the same reason. In the UK (FTSE 100) – 12.9 % of the index are energy companies aka oil & gas.
On the other hand, many of the Energy (euphemism for  oil & gas) companies lost between 20 to 50% of the market value last 18 months.  This was a good example on why individual stocks selected wrongly could compromise your goals. The gap over 5 years is 160 K! If I would simply keep all the money on a bank account, I would have today 286 K, instead of 208 K.
The results made me thinking about effectiveness of my investment strategy and the emotional attachments.  I have now committed to invest in index ETFs (exchange-traded funds) in S&P 500, DAX (German market) and some bond ETFs.  I will consider FTSE, however the UK is now actively threatening to break up from EU, while major manufacturers (Rolls Royce, Jaguar Land Rover) are moving new plants overseas only.
I will only do the speculative investment with side and unexpected income above my annual targets.
Posted by Personal Finance at 3:51 AM