Pew Research Center recently published a very interesting report on what is happening to the middle class in the US.  The report itself freely available online is recommended for reading, however if you do not have time to go through all 74 pages of it, I will share my observations and reaction to it. In 2015, 20% of American adults were in the lowest-income tier, up from 16% in 1971. 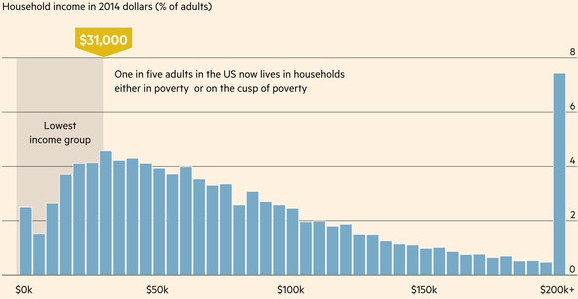 Education: There were no income status winners among educational attainment groups from 2001 to 2015, though the least educated adults (those with less than a high school diploma) and the most educated adults (those with at least a college degree) had the smallest losses. However, from 1971 to 2015, only one educational attainment group did not lose income status: college graduates.
College educate adults are more likely than others to be upper income, however if in 1971 people with bachelor's degree or more combined represented 92% middle or upper class, in 2015 it is 88%. Degree is lesser guarantee of income in nowadays. 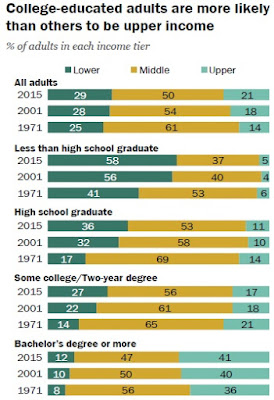 The Great Recession of 2007-09, which caused the latest downturn in incomes, had an even greater impact on the wealth (assets minus debts) of families. The losses were so large that only upper-income families realized notable gains in wealth over the span of 30 years from 1983 to 2013 (the period for which data on wealth are available). The wealth gap is growing: 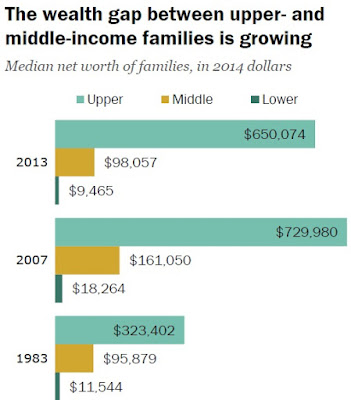 This is how income has been re-distributed in the USA over the last 45 years between rich and poor:

What does it mean? In the practical terms, unless you came from extremely wealthy family it means that nobody is protected.  The well paid manufacturing jobs are now shipped overseas.  Give it another 20-40 years and with no change other well paid jobs will follow them, as it is very hard to be devoted from the real economy and be paid.

For clarity: difference between "median" and "average" The median income refers to the income that is directly in the middle if you figuratively write down all the income in order from least to the greatest. So, in essence, no more than half the population has a greater (or lesser) income than the median income. The average is simply adding all these incomes together and dividing by the number of incomes.

Posted by Personal Finance at 10:30 AM